Two years on M11 Highway: Traffic at Section from St. Petersburg to Veliky Novgorod Increases by 26%

By the second anniversary of the M11 Neva Highway opening, the traffic at the section from St. Petersburg to Veliky Novgorod (km 546 – km 684) increased by 26% compared to the first operation year. The most popular route goes from the St. Petersburg Ring Road to the ramp to Kolpino and Sofiyskaya Street, which acts as an intracity highway and allows avoiding the trademark traffic jams on Moskovskoye Shosse. This 16-kilometer route accomodates 1/5 of the traffic flow between Tver and St. Petersburg.

“The most intense traffic is in summer. Traveling along Neva Highway has become a full-fledged alternative to airplanes and trains, and when the gardening season comes, Petersburgers take the toll road for suburban vacations. Peak values are usually registered in July and August: the sections may be used by more than 1 million cars per month. Two Fridays, August 13 and 20, were record-breaking, as the number of passages exceeded 44 thousand per day”, says Aleksey Nikiforov, CEO of Two Capitals Highway, LLC.

The share of passenger cars in the total traffic flow at Sections 7 & 8 is up to 82%. Passenger car traffic changes due to the seasonal increase in the number of trips, which starts in April, peaks in the middle of summer, and starts falling in September. Truck traffic is fairly stable and not subject to seasonal fluctuations – peak values are registered in December, February, and March, when the share of trucks reaches 36%.

To make the section managed by Two Capitals Highway safe and comfortable, its condition is monitored by operational services around the clock. If an emergency situation arises on the highway, for example, a vehicle is out of fuel or has a flat tire, or its driver or a passenger feels bad, the Traffic Safety Inspectors are ready to help. This year, such assistance was provided 1,264 times on the Section at km 546 – km 684, while in more than half of the cases, the cause was a car breakdown. 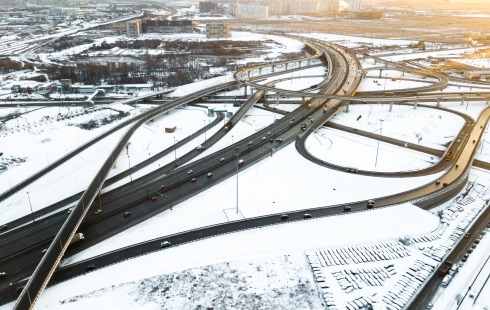